An example student research essay
*** Students, please remember, that any unacademic use of this essay (i.e. plagiarism) submitted in class will result in failing the course.

We Will Never Be Perfect and That’s Okay

College of Liberal Arts, the University of Texas at Arlington

ART 1317: Art of Africa, Asia, Oceania, and the Indigenous Americas

This essay follows Prompt 1 and APA citation style. I am a native English speaker and writer, so I am comfortable writing in this language. This is my second research paper.  Constructive criticism is welcomed and always appreciated.

We Will Never Be Perfect and That’s Okay

Expectations often rule our lives, such as the expectations that come with stereotypes about people we meet. We even ascribe expectations to objects, especially those objects that we make or use to create. As a classical musician, I often place unwarranted expectations on my instrument. Some artists challenge expectations to ask their audience to think before assuming. In this paper, I analyze one artwork from the series Translated Vase (Figure 1) by Yeesookyung to consider how she tackles the myth of a masterpiece and helps us reflect on how stereotypes affect our lives. 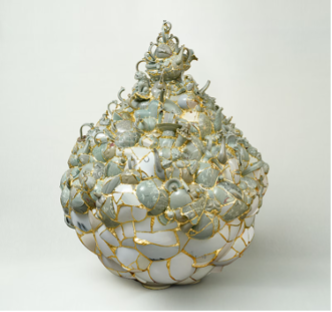 Translated Vase began in 2002 as Yeesookyung transformed destroyed pots into assemblages of the unexpected (Kim, 2022). It is not uncommon for Korean master potters attempting to reproduce historical styles to smash vessels because of the smallest of flaws (ibid). This practice ensures the rarity and value of those that survive the reproduction process (Yeesookyung, n.d.).  Yeesookyung steps in at the point of destruction to collect raw material for her work. She assembles 3-D puzzles of vessels, sealing the cracks and joins with gold to hold everything together (Yeesookyung, n.d.).  The artist states “From the moment of destruction, I obtain a chance to intervene and fabricate new narratives with my own translation” (ibid).

In Figure 1, the gold joinery creates a maze across the light green and white fragments pieced together. The light green ceramics in the top half of the piece are reproductions of Goryeo period (918-1392 CE) celadons while the bottom half is dominated by reproductions of white Joseon period (1392-1897 CE) porcelains (Yeesookyung, n.d.). While the artwork has a cohesive feeling of form, handles, spouts, and bulbous curves stick out to catch our eye and make us consider the source of this material.

Each piece of reproduction carries the burden and weight of what a masterpiece should be. Perfectionism determines which will remain intact and which will be broken and discarded (Kim, 2022). We can see the same thing in each of us as individuals today. We carry the weight of what society, school, or family expects of us. Rejection can feel like one is being discarded, just as a master potter discards what is flawed. That is more than enough to break a person and for them to question their utility and place in the world. Yeesookyung’s practice is about saving these rejected imperfect individuals and making something beautiful from the ensemble. This work is inspiring if applied at the human level of care for those who have been ill-treated.

Yeesookyung’s work relates to that by Ai Weiwei, especially 1-125,000,000 (Sunflower Seeds (Figure 2). Both artists build assemblages from small, unique, and seemingly pitiful things.   Ai Weiwei challenges the idea of expectations in a different manner, by displaying the dichotomy and tension between an individual and society (McCurdy, 2022b). Are we viewed as a whole mass or are we viewed as different individuals by our governments? This directly connects to Mao Zedong depicted on a 1960’s poster declaring ‘revolutionary committees are good’ (Figure 3) and how the people of China were being depicted as sunflowers in the poster facing Mao Zedong who is in front of the sun (ibid). Through this poster, we can see this leader saw the people more as a cohesive and contained whole and less as each person being their own individual (ibid). 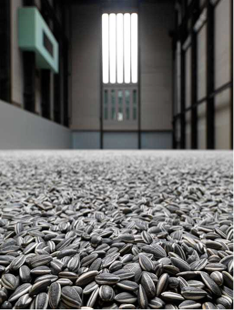 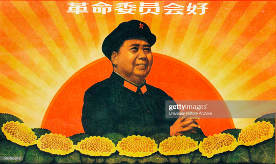 Ai Weiwei’s work sparks questions like: what are expectations and stereotypes that come with being seen as a whole and as an individual? Looking at the poster of Zedong, it’s obvious there was an expectation for the people as a whole to conform and accept the new ideas that came along with the political shift towards communism in People’s Republic of China. Because of this, people outside of China often assume that the people of China are brainwashed because they have pride in their country’s achievements (Vulture, n.d.). This is obviously an oversimplification. Ai Weiwei is only one example of someone from China challenging the history and policies of the Chinese government. There are many more. Every person is individual in their way just like each sunflower seed Weiwei commissioned is not the same, and just like each piece of the Translating Vase (Figure 1) series will never be the same.

The world is tainted by negative stereotypes, and we might even catch ourselves perpetuating them without thinking. The photo Indian Photographing Tourist Photographing Indians, Crow Fair, Montana (Figure 4) by Zig Jackson captures this process. A tourist or journalist photographs an elderly Native American couple, who don’t appear pleased (McCurdy, 2022c). Native American culture is often stereotyped as being stuck in the past or blind to progress (ibid). These stereotypes derive from the western depiction of the Native American being the dying people/culture, in need of a white savior, or incapable of being civilized or educated (ibid). The tourist’s choice of an elderly couple as her subject could be motivated by the ‘dying Indian’ stereotype (ibid). This stereotype was also problematized by James Luna is art performances like Artifact Piece (Figure 5), wherein he used his own living body to humanize Native Americans for museum goers. 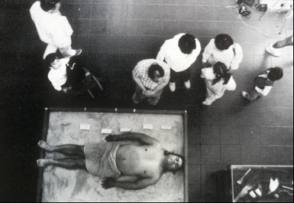 Instead of being seen by westerners as people that deserve their individuality and identity away from these stereotypes, Native Americans are often viewed as this alien-like population that needed to be “studied” to be understood (ibid). There were many instances where Native Americans were treated as science experiments because of this deep refusal to accept that these are real people who simply have different cultural backgrounds, beliefs, and physical features. These harmful expectations and stereotypes can even lead to exceedingly harmful actions, such as the mass deportations forced via the Indian Removal Act (Saunt, 2022).

Too often the beauty of people, their culture, and their individuality is ignored and trampled over because they do not meet the criteria of what powerholders expect. African cultures have often been treated in this manner, as savage groups who can never met the expectations of ‘civilization,’ and thus can be “taken” as property. Famous examples such as the British Punitive Expedition against the Benin Kingdom of Nigeria demonstrate the violence which can result from notions of superiority (based on a series of unfounded and irrelevant expectations) (McCurdy, 2022c). The theft and sale of thousands of Benin bronzes, such as Uhunmwun Elao (Figure 6), and other objects by the British totally ignored the autonomy and history of Benin people and artists. 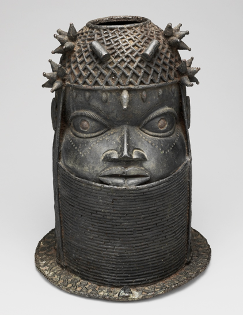 The social and political state known as ‘civilization’ is often considered a ‘perfect’ state which can only be achieved after a progression towards goodness and rightness. This view descends from European history and does not account for the unique circumstances and differences of experience around the world. Perfectionism is a common human drive, as seen in the work of the Korean master potters, but it should not dictate the perception and treatment of people. We all have seen the ugly face of expectations and stereotypes as well as the effects they have on you or the people around you. Yeesookyung, Ai Weiwei, Zig Jackson, James Luna, and those fighting for the repatriation of Benin bronzes today (see McCurdy, 3033c) show through their work that one’s identity should not be determined by others’ expectations. We are more than shattered ceramics, a number without a face, and the untrue depictions that the media puts out into the world.

McCurdy, L. (2022b). Why Do I Have to Do What You Say? [E-book]. In Where Does Art Come From? (1st ed.). Mavs Open Press. https://uta.pressbooks.pub/wheredoesartcomefrom/chapter/why-do-i-have-to-do-what-you-say/

McCurdy, L. (2022c). Why Do People Take What Doesn’t Belong to Them? [E-book]. In Where Does Art Come From? (1st ed.). Mavs Open Press. https://uta.pressbooks.pub/wheredoesartcomefrom/chapter/why-do-people-take-what-doesnt-belong-to-them/

Where Does Art Come From? by Leah McCurdy is licensed under a Creative Commons Attribution 4.0 International License, except where otherwise noted.